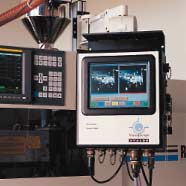 All molders have a few things in common. They want faster production cycles They don't like tool damage. They want to produce only good parts. And they want to minimize tool wear.

The problem is that these are conflicting goals. Adding ejector strokes to avoid tool damage increases tool wear and slows production cycles. Fine-tuning molds to reduce stuck parts may allow fewer ejector strokes, but it increases vulnerability: every once in a while a part sticks, even in the best mold.

So, how can molders reconcile these seemingly incompatible goals?

One possible answer is vision automation. Over the past decade, vision systems have proved themselves capable of detecting a variety of part- and mold-related problems in critical part inspection tasks.

More important, vision technology provides a means to achieve automatic press operation. How important is this? In a recent survey of injection molder, 75% listed uninterrupted production as an even higher priority than decreasing cycle times.

All molders recognize the importance of the part forming process, and they spend a great deal of time fine tuning this process to ensure molding of good parts as quickly as possible. On the other hand, the mold open portion of the cycle often is ignored, because mold-open operations are considered routine, or even a necessary evil. But the mold is open for a large portion of the cycle, and optimizing this part of the cycle can result in significant process gains.

It's worth noting that every molder has a strategy to avoid stuck parts. Many add ejector strokes to ensure that parts are properly ejected. The "insurance stroke" theory is based on the idea that an extended cycle is better than a mold crash.

Others take a different approach, fine tuning their molds to ensure proper ejection in a single stroke. Let's call this the "single stroke" theory. Both approaches recognize that part ejection is a crucial process step, but neither approach is foolproof, the mold may still close on a stuck part.

Pressure-based mold protection can minimize damage in the event of a crash, but cannot prevent it. And while traditional vision systems add a reliable mans of ensuring the mold doesn't close on a stuck part, they also add about one second of cycle overhead. Further, if a stuck part is detected, they simply stop the press and sound an alarm so an operator can correct the problem. While this is clearly better than a mold crash, vision systems can play a more important role in the process cycle, yielding both process gains and uninterrupted operation.

How? Three words: adaptive part ejection. Because much of the mold-open cycle is devoted to ensuring reliable part ejection, the technology specifically targets this are for improvement.

The key to adaptive part ejection is "SkipEject" technology. To understand this concept, consider a typical mold cycle with three ejector stokes. With adaptive part ejection, the press performs a single ejector stroke, and the vision system checks for stuck parts. If all parts are clear, SkipEject signals the press to close the mold. When a stuck part is detected, SkipEject signals the press to repeat the ejector stroke until all parts are ejected.

In practical terms, adaptive part ejection has some notable advantages. First, it eliminates insurance strokes; only the number of strokes needed to eject the part are used. Because most parts are ejected on the first stroke, this can significantly shorten cycle time. Second, the process automatically recovers from a stuck part without operator intervention. Third, tool wear is reduced because fewer strokes are used. In addition, these systems track ejection data by cavity, frequency, and time. This information can help a molder ferret out the problem areas on a tool and rework them to further refine performance.

To better understand the implications of the adaptive technologies, let's examine two typical scenarios. The first involves a molder who uses an insurance strokes strategy. The second focuses on a molder who uses the single stroke theory.

In this first scenario, the focus is on saving ejector strokes. Once captive molder using this technology has a plant with 48 presses. Based on the initial productivity analyses, reducing unnecessary ejector strokes is identified as the most promising application for vision systems.

The machines have, on average, eight cavities per mold. To ensure ejection, the molder uses an average of three ejector strokes per cycle, and each stroke averages one second of cycle time. The average number of stokes necessary for proper ejection is 1.3. Thus, the addition 1.7 strokes are wasted cycle time.

Using SkipEject, the molder can eliminate almost two ejector strokes per cycle. This would reduce the average cycle time from 17.0 to 15.3 sec. While this seems like a relatively modest gain, it represents a 10% increase in productivity.

Assuming the average productivity for each press is $400,000 per year, SkipEject will increase productivity by an average of $40,000 per press. That means, the total productivity increase for the plant will be $1.92 million annually, simply by saving unnecessary insurance strokes.

When the cost of the vision system needed is calculated in terms of return on investment, the payback period for plantwide automation is a few months. Keep in mind that this analysis does not consider the savings from reliable mold crash protection, which would further shorten the payback period.

The second scenario involves a custom molder of telecommunications and automotive parts with 26 ejection machines. The company uses a fixed number of tools. On most of its jobs, the molder uses a single ejector stroke. Occasionally, a part sticks and a mold crashes.

The latest generation of vision systems is prewired to quickly connect to presses with an SPI Robot Interface. Avalon says its VisionScope system can be installed during regular mold changes, in a little as 15 minutes.

In the past five years, the company has updated is processes with sprue pickers and other automation techniques. Manager would like to increase the level of automation so operators can focus on additional quality and process control tasks. Productivity analyses reveal that automatic press operation would significantly help the company toward its goals. In fact, twelve of the presses seem ideal for lights-out 24-hr production.

Using ejection management software with SkipEject techniques, the molder can automate presses and move considerably closer to uninterrupted production. The vision system prevents mold crashes and the expensive retooling and downtime that go with them. Overall, this will keep the presses running with fewer interruptions which will help the company maintain its production processes at steady state.

The software also tracks ejection efficiency data, which will enable the molder to determine which cavities are sticking, when it occurs, and how often. This data tracking capability is particularly useful for preproduction qualification of new molds and materials.

Press B is a case where the molder had largely achieved a single-stroke part clearance. However, the vision system prevented six production interruptions and also provided troubleshooting data including the exact time for each ejection failure. For a multicavity mod, this report could be configured to indicate which cavity failed. This data, along with other statistical process control data from the press, can be used to determine the cause and effect of tooling or materials problems.

In this case, vision automation gives the molder a means to reach automation and productivity goals that are very important to the company. The end result is a more efficient operation that saves costs, runs more smoothly, and supports an engineering commitment to continuous tooling improvement.


Press-by-press productivity analysis involves surveying each press to identify the types of parts molded, press performance and cycle time characteristics, automation interfaces, and potential process gains. The goal is to determine which presses run or could fun automatically, which have unnecessary ejector strokes, and which have work cell operations that depend on predictable cycles. The result of this analysis is a clear picture of where the greatest productivity gains can be realized for each press.

Based on the finding from the initial analyses, a technology phase-in assessment is conducted to establish the equipment and services needed to take advantage of the vision automation options that have been identified. This includes appropriate lighting and camera mounting needs, machine interface requirements, frequency of mold changes, cycle setup requirements, training and service needs, and other impacts. Based on this information, a plan can be developed for implementing the new technology in logical phases, making it easier to manage the transition.

The final phase of the audit involves determining the financial implications of the collected data. This comprehensive analysis accounts for average cycle time, ejector strokes saved, hourly rate of production, total investment per press, depreciation, and tax rate. The result of the analysis is a clear picture of the return on investment expected from deploying vision automation.

Users can create "inspection windows" to monitor critical portions of the mod and receive reports on events related to each window.