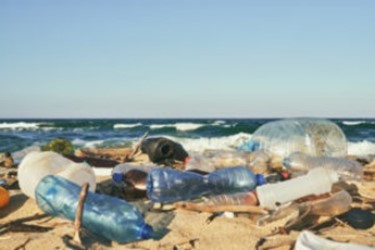 Plastic plants discharged 128 million pounds of pollutants into U.S. waterways last year, their operators reported to the EPA ― including 77,859 pounds of the most toxic pollutants.

Today’s petition calls for a total ban on the discharge of plastic pollution and detectable levels of the most dangerous toxic pollutants, including dioxin and benzene. As the fossil fuel industry increases plastic production and builds dozens of new facilities around the country, the petition says updated regulations are needed to protect waterways and public health.

“It’s appalling that the plastic industry is filling our waterways with plastic pellets and toxic chemicals under antiquated regulations,” said Julie Teel Simmonds, the Center for Biological Diversity attorney who authored the petition. “The EPA shouldn’t let petrochemical polluters spew one more ounce of plastic pollution into our rivers and oceans. We need rigorous new rules to counter this growing threat to public health, marine life and the climate.”

The outdated regulations from the 1980s and early 1990s fail to consider new pollutant detection and treatment technologies that can reduce the harms of ocean plastic pollution and toxic pollutant discharge from plastic manufacture.

The petition calls for the EPA to take four specific actions under the Clean Water Act:

Most groups supporting the petition have been fighting existing petrochemical plants and the nearly 300 new projects proposed around the country. Those include projects planned by Formosa Plastics, which a federal judge recently found liable for routinely polluting Texas waterways with billions of plastic pellets just as it’s proposing to build a massive new plastics plant in St. James Parish, La.

“We showed how recklessly Formosa Plastics pollutes our waterways and communities. The plastics industry clearly needs stronger regulations and oversight,” said Diane Wilson with San Antonio Bay Estuarine Waterkeeper and lead plaintiff in the successful civil lawsuit over plastic pollution from the Point Comfort, Texas plant. “As a former shrimper, I know how plastic pollution threatens seafood and other vital industries. And as someone who spent years documenting this plastic pollution, I think it’s time for the federal government to regulate this industry properly.”

“Waterkeepers around the world work every day to address the growing plastic pollution crisis by sampling microplastics, helping reduce packaging and collecting ocean plastic pollution. Now we need the federal government’s help too,” said Marc Yaggi, executive director of Waterkeeper Alliance. “The United States has traditionally been a global leader in addressing water pollution challenges, and we have the ways and means to combat this global epidemic. It’s time for EPA to make meaningful efforts to achieve its mission by protecting public health and the environment from pervasive waste and toxic pollutants. Granting this petition would be a powerful first step in the right direction.”

An estimated 8 million tons of plastic enters our oceans every year, and it’s expected to outweigh all the fish in the sea by 2050. Environmental pollutants adhere to plastic as it travels through the ocean. If ingested, those contaminated plastics can sicken marine life — and, ultimately, humans who eat contaminated seafood. Plastics can also choke or entangle marine life, including sea turtles and whales.

“Whales, turtles and other cherished marine species are dying because of the millions of tons of plastic in their environment,” said Zak Smith, senior attorney with Natural Resources Defense Council. “The plastic industry’s business model depends on avoiding responsibility for the deaths of a whale killed by 50 pounds of plastic in its stomach or the death of a sea turtle killed by eating just one piece of plastic. The fossil fuel industry is waging a silent war against wildlife, hammering species from all sides, be it climate change, spills, or plastic pollution. It’s unacceptable and we need to immediately reverse course or many of the marine species we love will be a thing of the past.”

Plastic-creating petrochemical plants, which are often located in low-income communities of color along the Gulf Coast and Appalachia, emit tons of air and water pollution. Water pollution now permitted by these plants include benzene, dioxin, phthalates, and polycyclic aromatic hydrocarbons, all harmful to human health.

“My community is suffering enough from industrial pollution,” said Sharon Lavigne, director of Rise St. James, which formed to fight a Formosa Plastics plant proposed for her Louisiana neighborhood. “The federal government is supposed to protect us and they’re not. We’re going up against a billion-dollar industry and we need help in that fight.”

The plastic industry has announced plans to increase North American plastic production by at least 35 percent by 2025. The increased production is being driven by an oversupply of fracked natural gas. Some of the biggest projects are ethane cracker plants that produce plastic, much of which is turned into single-use packaging.

“Confronting the climate crisis demands an immediate, rapid, and complete transition away from fossil fuels and plastics are simply fossil fuels in another form,” said Carroll Muffett, president of the Center for International Environmental Law. “As the clean energy transition accelerates, the petroleum industry is trying to salvage its future by transforming our dependence on oil and gas into an ever-greater addiction to plastics. Doing so will accelerate the plastics crisis even as it undermines global efforts to avert climate chaos.”

In addition the groups mentioned above, co-signers on the petition include Sierra Club, League of Conservation Voters, Greenpeace, Friends of the Earth, Earthworks, 350.org, Food & Water Watch, Surfrider Foundation, Environment America, The Climate Reality Project, U.S. PIRG and other national conservation groups; more than 90 Waterkeeper Alliance and 11 Indivisible chapters and affiliates from around the country; Sacred Places Institute, Wishtoyo Foundation, and other social justice and Indigenous groups; and local groups actively fighting proposed petrochemical projects in their regions, including Healthy Gulf, Texas Campaign for the Environment, Louisiana Bucket Brigade, No Waste Louisiana, and Ohio Valley Environmental Coalition. A complete list of co-signers is available here.

Video and images of Formosa Plastics’ pollution are available here for media use, more images available upon request.